Ain’t Much Connectivity in Paradise

There is inspiring beauty and grandeur in the northern east coast of Lake Superior. The bold scenery defies photographs or description, and there are big fish. Really big fish.

Bob with the fish that we caught – through copious amounts of teamwork!

Everyone is happy with our fish! This24-inch lake trout jumped many times and fought hard until we landed him 20-minutes later.

The weather on Lake Superior is abrupt, unforgiving, and unpredictable. And it is cold on the open water. Temperatures in the upper 60s are welcomed. Anchorages are like a coat from the cold.

Entering Otter Cove, a lovely, 70 degree breeze warmed our faces as we left the chilly waters of Lake Superior.

As we transited the pass into Otter cove, the thick fog that had plagued us all day magically lifted. Rock faces rose before us and the cliffs were illuminated by blue sky.

Warm southerly winds blowing over the near-frozen temperatures of the lake water bring fog. And the fog stays. Radar, GPS-driven chart plotters, and a navigation app on the iPad are a must; otherwise you stay put. Calm seas generally accompany fog and you must travel when the seas are gentle.

Anchoring in Otter Cove was a gift of a lifetime. The solitude was palpable. Otter Cove is a well-protected paradise with great holding. We anchored, lowered the dinghy, and explored the cove. We fished. We went for dinghy rides throughout the rock outcroppings and islets. We laughed. We read. We watched beavers and wished for a bear sighting. We wondered at the beauty of the north shore of Lake Superior. Otter Cove is far away from roads, and civilization; even the VHF weather reports are filled with static and dropped sentences. 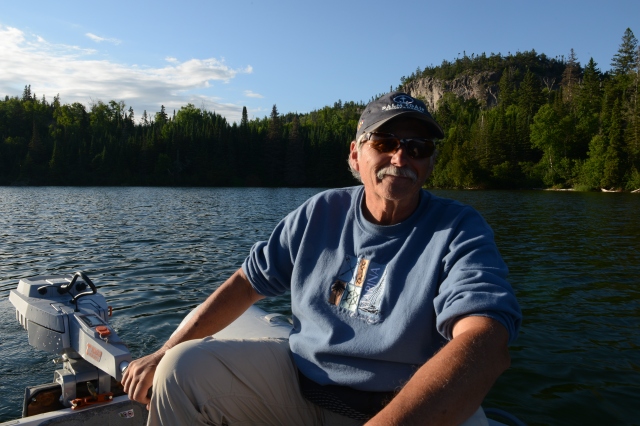 Bob piloting the dinghy among the rocks and islets along Otter, Cove.  The electric motor works beyond our expectations.

Sunset only adds to the magic of Otter Cove.

4 Responses to Ain’t Much Connectivity in Paradise