From Salter’s Bay, we traveled to Rossport for one night before heading southeast on the long journey out of Lake Superior. The Serendipity Gardens Café features fresh Lake Trout and highlights local artists by hanging their work on the walls. A Douglas Hunt watercolor called to us as we ate dinner.   He is an exceptional Canadian artist and works mostly in landscapes of the Canadian north shore.

Walking through town we found a pie maker who only uses fresh-picked, local fruits for her pies. For the next several days we would feast on a delicious strawberry, rhubarb, and apple pie!   It is a great combination.

After the evening out in Rossport, and a night tied to the dock, Arkansas Traveler took us ten miles to Chubby Harbor, on the south side of Salter’s Island. We spent a magnificently quiet night hovering gently over the anchor.

Leaving the anchorage early, we watched a Bald Eagle catch breakfast on the fly. It looked so effortless – envy seethed from my pores.

Fly fishing at its best!

The Battle Island Light was well-lit by the morning sun as we cruised by on the 33-mile run to the group of islands known as the Slates.   These islands formed when an ancient meteorite hit the earth and caused a volcanic event. Through millions of years of erosion and scouring by glaciers, the Slate Islands are the evidence left to tell the story. 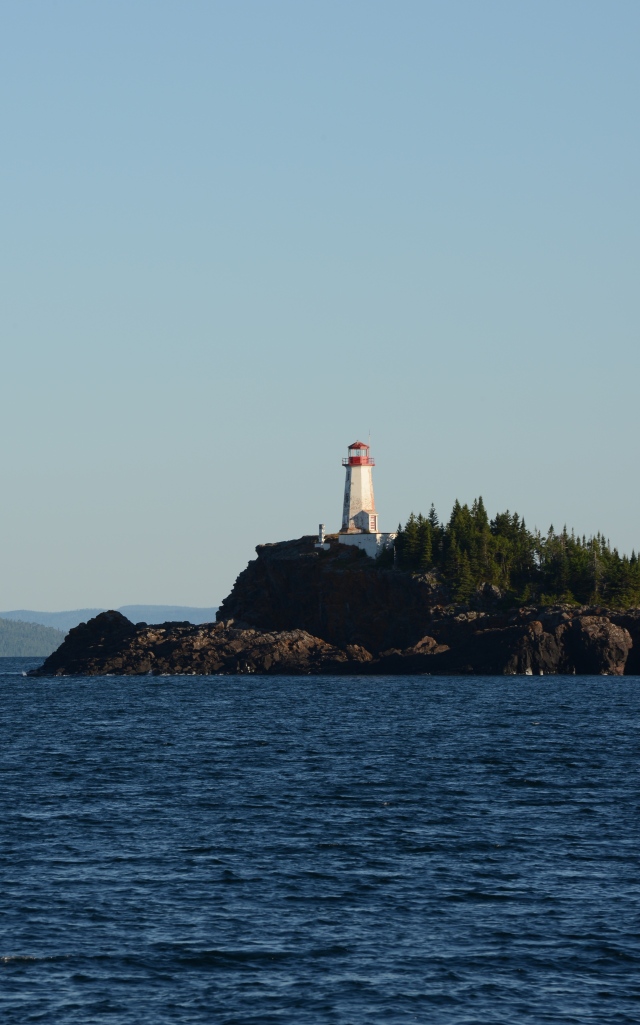 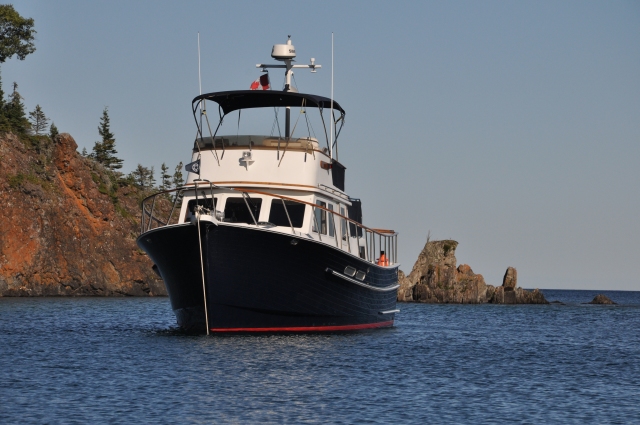 Typically we like to anchor in a large area with lots of swing room in case the wind changes overnight. Additionally we prefer to put out extra anchor rode, thus decreasing the angle of slant of the line between the anchor and the bow roller. This helps an anchor dig in during high winds; with a short rode, the anchor may dislodge during a blow.

You can see in the picture above that the boat is very close to the cliffs of Patterson Island with little room to swing.  The anchor line does not have much of a slant – it is not exactly straight down, but still not the way we think is best.   You will also note that while there are some gnarly rocks to stop her, Arkansas Traveler’s anchorage is quite open to Lake Superior. The anchorage, however, is striking; an attentive eye to the wind/weather forecast, guarantees glorious exploration among the coves and islets and perhaps even some luck with fishing.

4 Responses to Last Days on the Canadian North Shore