Posted on September 2, 2014 by Arkansas Traveler

What is it that we love so much about the Erie Canal?  The history and the romance would be good places to start. The canal is a living and working monument to engineering, tenacity, and Yankee ingenuity.

The canal was completed in 1825, before dynamite was invented. It was essentially dug by hand with the help of mules, horses, grit and old-fashioned stubbornness.

Congress declined the opportunity to fund the construction and Thomas Jefferson dismissed the idea as only a little short of madness. The voters in New York agreed to take on the risk and fund the canal in spite of the naysayers. This simple yes vote dramatically changed the progress of the northeast. It opened trade routes and significantly reduced transportation costs. It gave birth to small towns along the banks of the canal. It turned Salt Town into Syracuse and made Buffalo a major port on Lake Erie.   It catapulted New York City ahead of Philadelphia as the most important seaport on the east coast.

The canal quickly paid for itself through usage fees. Demand for passage was so great that the canal was expanded by 1862 to accommodate more traffic and larger barges.  The long, shallow barges were pulled by mules walking the tow-paths that ran alongside the canal. In 1903, as engine-driven vessels became more prevalent, the canal was again reworked and integrated with existing rivers and lakes to facilitate the increasing commercial traffic.

Today you primarily see recreational boats traveling the canal system. There is a usage fee, but it is minimal. The cities and towns on the water still profit from visitors and summertime water traffic. New York State proudly maintains the historic waterway and its locks and gates. Below are photos of boats within the magnificent maintenance fleet.   At the end, there are photos of a very special tugboat. 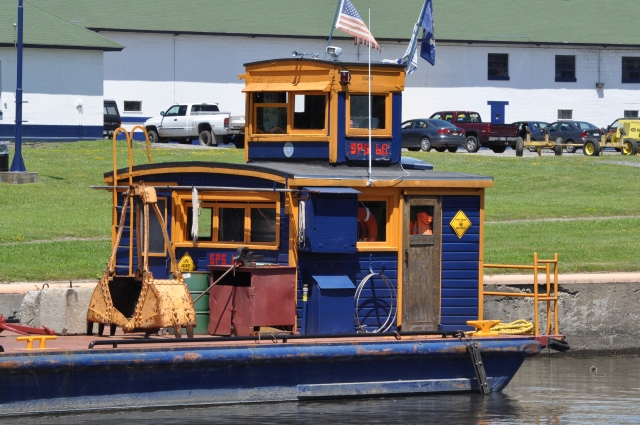 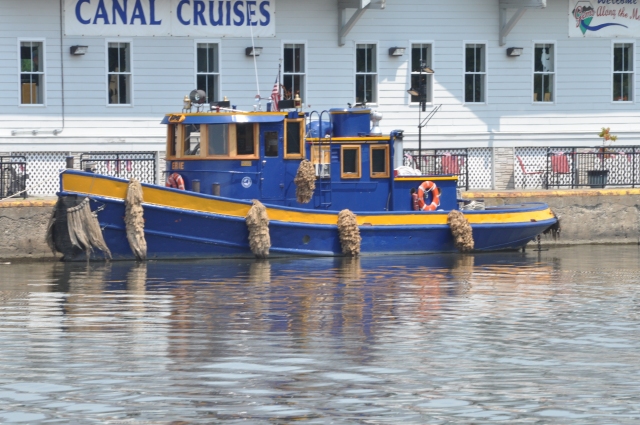 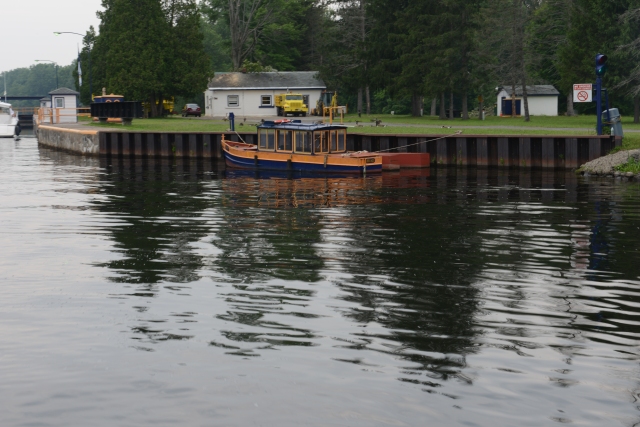 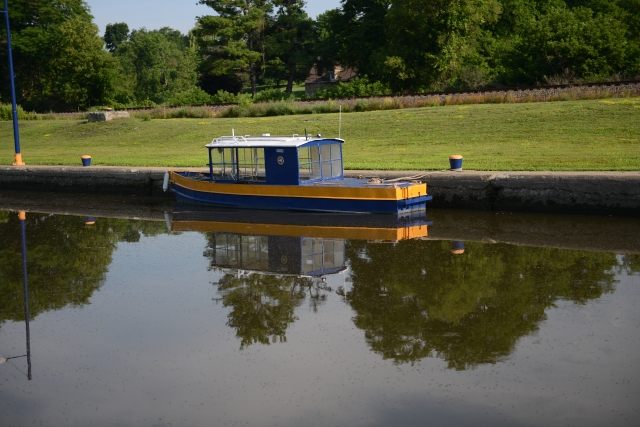 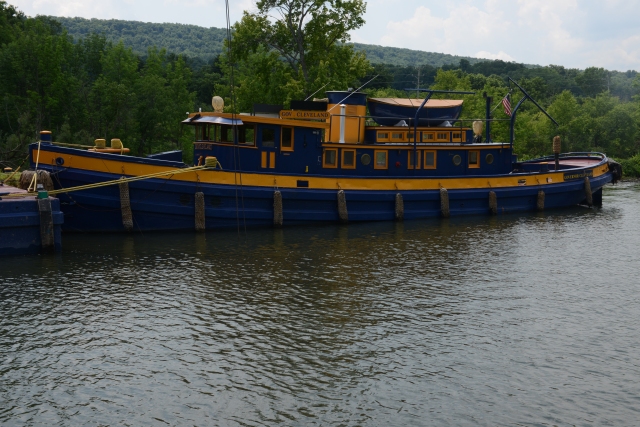 The tug, Governor Cleveland, was acquired by the NY State Canal Corporation in 1927 as an ice-breaking tug.

The flagship of the New York State Canal Corporation is the tugboat, Urger. The Urger was built in 1901 at Ferrysburg, Michigan as a commercial shipping vessel. She was christened the Henry J. Dornbos and worked for several years in a fishing fleet. In the early 1920s she was renamed the Urger and purchased by New York State to work the barge canals. The Urger as she passes Winter Harbor Marina in Brewerton, NY.  Note the tugboat beard (protective rope-work) on the bow. Bob visits with a crew member about the Urger’s history. 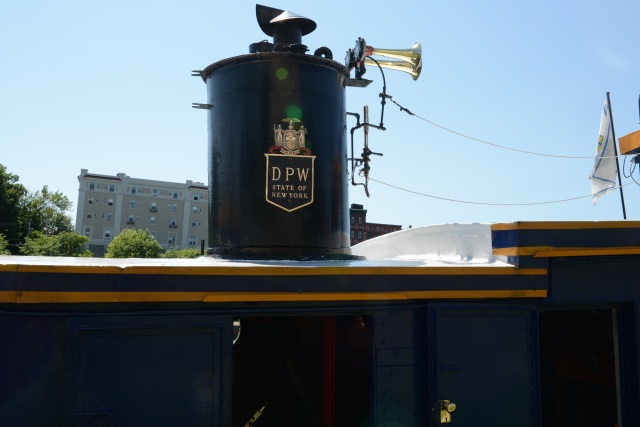 The Urger’s smokestack. The tug is on the National Registry of Historic Places. 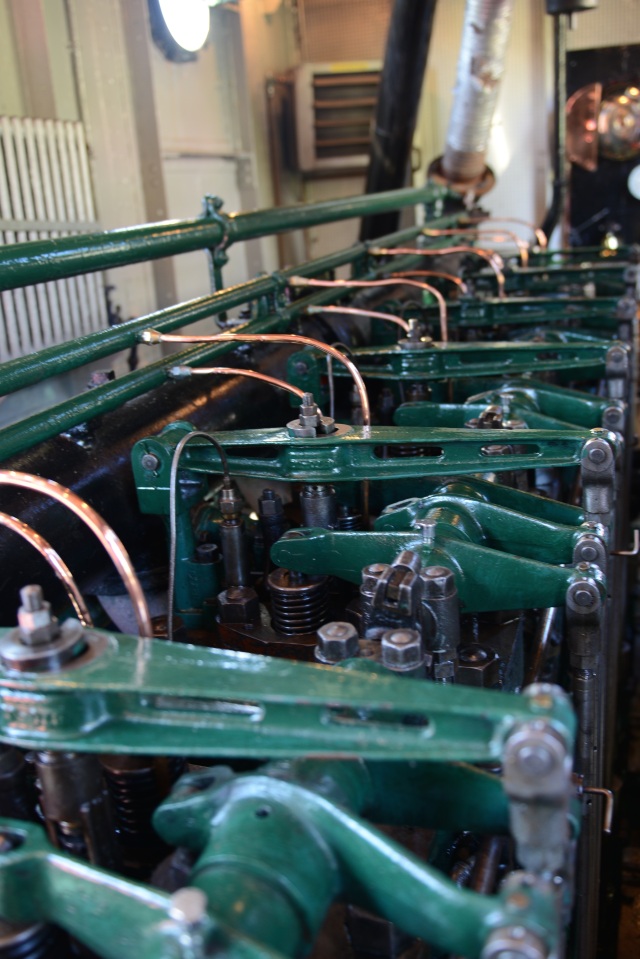 The Urger is powered by a World War II surplus Atlas Imperial six-cylinder engine installed in 1947. The diesel engine replaced her original steam engine and provides 320 horsepower and tons of torque to the propeller (her prop measures 5 ½ feet in diameter). The wheelhouse is spartan, and beautiful. 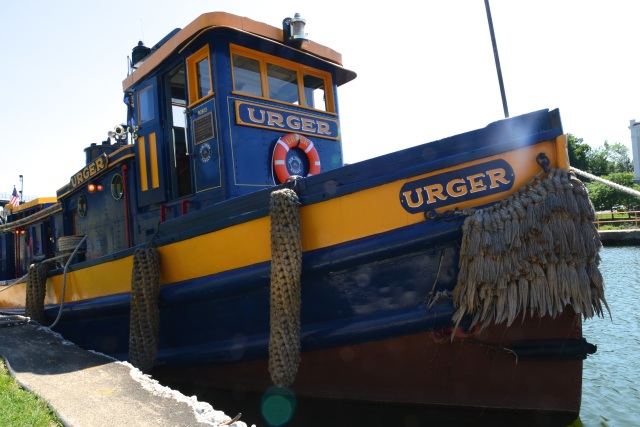 Urger.  Isn’t that a marvelous name for a tugboat? She has gently and determinedly urged things about in her waters for over 100 years; some of my favorite people are urgers. This entry was posted in S - NYC to Brewerton & the Little Triangle; Summer 2014. Bookmark the permalink.

2 Responses to The Erie Canal