Revisiting the Chesapeake Bay, I

I can’t over-sing the praises of the Chesapeake Bay as a delightful cruising ground.   Every wave crest is a salute to the maritime culture and rich nautical tradition.

Coming from the south through the Dismal Swamp, we entered the Chesapeake Bay via the busy harbor of Norfolk, Virginia. The day was overcast with an occasional drizzle of rain.

We spent two days traversing the Dismal Swamp. This lowland area was first surveyed and tamed by George Washington. 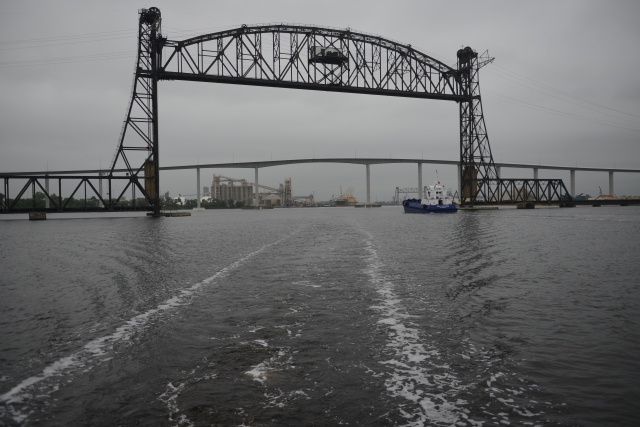 Entering Norfolk Harbor and leaving the narrow channels of the Atlantic Intracoastal Waterway in our wake.

Work on the water never stops.

The long harbor is a contrast of sail and power and we took our time maneuvering slowly through the cities of Norfolk and Portsmouth.

The US Naval Base in Norfolk is the world’s largest naval station. Gray steel and red and white security boats abound. 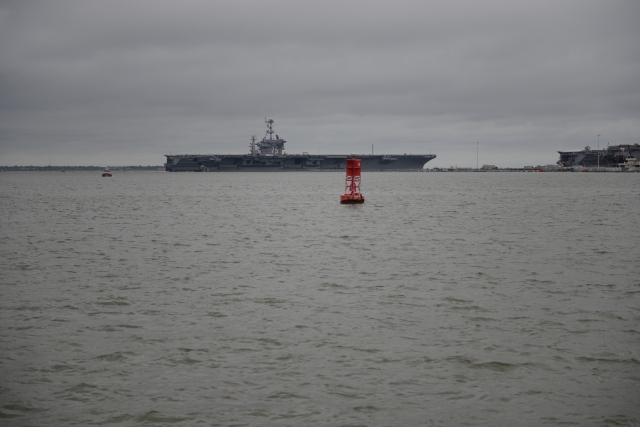 Security vessels make sure that others maintain a wide berth around Aircraft Carrier 75.

At the north edge of Norfolk is Willoughby Bay and we docked there for a few days at Rebel Marina. On June 2 we crossed the open water of the lower Chesapeake, heading north to Deltaville, Virginia and the Monk Rendezvous. Slanted light from the rising sun illuminates the sailing masts at Rebel Marina. We know that we are in serious cruising waters.

The Rendezvous is a gathering of boats just like ours. About 40 Monk 36 owners & their boats converged on Dozier’s Regatta Point Marina to share stories, ideas, and innovations to the boats. It was very humbling and invigorating to tour the 20 or so Monks and to meet with the owners.   I was amazed at the number of engineers who own Monks and learned a great deal about lots of little details that make cruising onboard a Monk delightful. We came away with a renewed respect for Ed Monk, the naval architect who designed the Monk, and with a deepened appreciation of our boat’s many special attributes. Most importantly, we made new friends.

Arkansas Traveler, Sanctuary, Adirondack, and Sno Daz; four Monks all in a row.

This entry was posted in T - Sanibel Island to NYC; March to June, 2014. Bookmark the permalink.