Posted on December 31, 2013 by Arkansas Traveler

On December 30 at 0600, the sky was overcast, the winds were light and variable and the temperature was 41 degrees.  Just after sunrise we raised the anchors and turned downstream.  The day remained overcast as we motored toward the last lock on the Tombigbee/Black Warrior River at Coffeeville, Alabama. 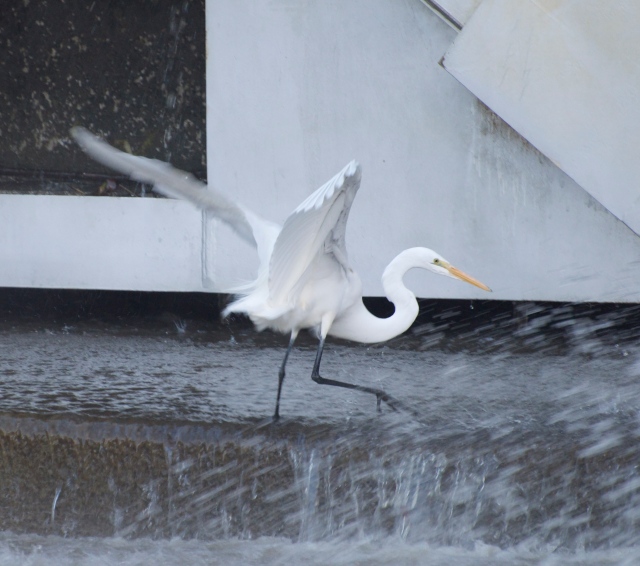 A Great Egret picks its way along the sill of the lock gate, and looks for stranded fish.

The birds were happy with the weather and the water.  We enjoyed the adventure.  The rivers were not to the flood stage as defined by NOAA, but they were in the action stage which is one notch below flood.  While apprehensive and very careful, we took advantage of the increased current to make up for the diminished RPMs and short days.

Beyond the Coffeeville Lock, the river becomes tidal and this adds another dimension to the current.  We did not want to travel into the night and we did not want to anchor in the river again, so at 1500, and 100 miles north of Mobile, Alabama, we ducked into the cut-off to the abandoned Lock Number One.  We had covered 68 miles. 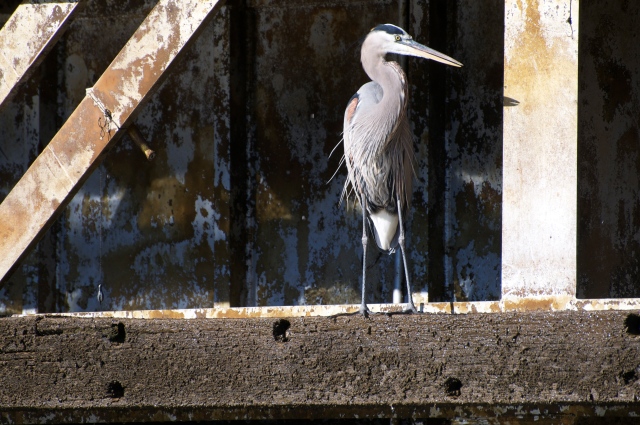 A Great Blue Heron finds a bit of sunshine on the sill of a lock gate.

Lock Number One and its cut-off channel are now a state recreation area.  Due to the flood conditions, the water was much higher than normal and we anchored in the middle of a large pool and were able to swing on one anchor through the night.  It was a safe and beautiful anchorage with fish jumping around us.  It was still cloudy but warm and Beulah ventured on deck to watch the fish and to listen to the birds.  We sat on the flybridge until it was time to go below to cook and to discuss the next day’s float plan.

At 0715, Bob started the engine and at 0730, we were underway.  The temperature in the closest town was 42 degrees, the winds were light, and the sky was overcast.  We nosed into the river tentatively, expecting to again see a flood of debris, but the river was clear.  The current was just as swift as the day before but there were not any threatening trees or branches heading down the river with us. 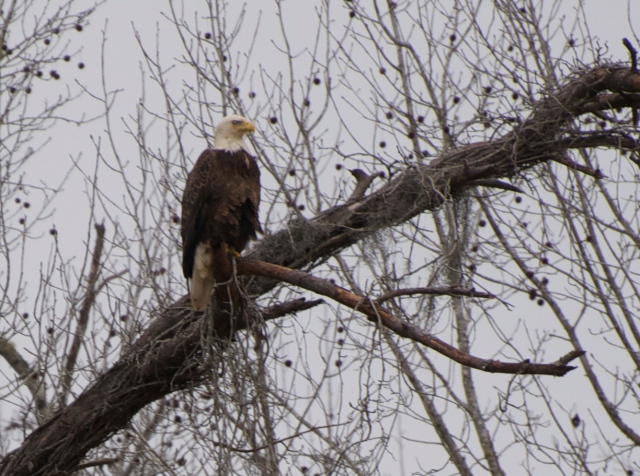 A Bald Eagle assesses our progress on New Year’s Eve.

Sixteen miles north of Mobile, another cut-off, Big Bayou Canot, offers some of the best anchorages along this part of the river.  It is subject to tides, and in normal conditions the addition of a stern anchor is recommended to hold a boat parallel to the shoreline, but in this near flood-stage circumstance, the strong downstream current did not let the Traveler budge.  After 88 miles, we anchored at 1630 in Big Bayou Canot, well before the 1700 sunset.   It was a wonderful day and we put plenty of miles under the keel.  The only drawback was the cold and we welcomed the warmth of the cabin once we anchored.

We watched the weather closely.  It was to be a short day’s trip through downtown Mobile and then across the bay to Fairhope, Alabama where we planned to have the boat hauled and the bottom painted as we readied her for salt water.  Rain showers were predicted for the morning with higher winds, waves and storms in the afternoon.

We decided to travel early, in spite of the rain, because stormy weather was forecast for the rest of the week.  We had survived without damage the near flood stage conditions and did not want to risk sitting out a flood with its various dangers.  This was our window.  Besides, Beulah was almost out of cream.  And I was craving black-eyed peas and spinach for luck in 2014.

At 2200 the sky opened up and the rains came pouring down.

This entry was posted in V - 2013; Back Onboard Again. Bookmark the permalink.